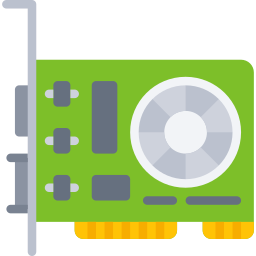 The Advanced Media Framework provides optimal access to AMD GPUs for multimedia processing. The AMF framework is compatible with most recent Radeon GPUs starting with the Southern Islands family and APUs of the Kabini (2013), Kaveri, Carrizo families and newer.

Intel Quick Sync Video is Intel's brand for its dedicated video encoding and decoding hardware core. Quick Sync was introduced with the Sandy Bridge CPU microarchitecture on 9 January 2011 and has been found on the die of Intel CPUs ever since.

QSV can be unstable on Windows 7 and may require workarounds to enable it.

Nvidia NVENC is a feature in Nvidia graphics cards that performs video encoding, offloading this compute-intensive task from the CPU to a dedicated part of the GPU. It was introduced with the Kepler-based (GKxx) GeForce GTX 600 series in March 2012.

Support for mobile GPUs can exist, but most will not support NVENC. If you get an error when trying to use the NVENC encoder and your drivers are already up to date, your GPU very likely does not support NVENC.